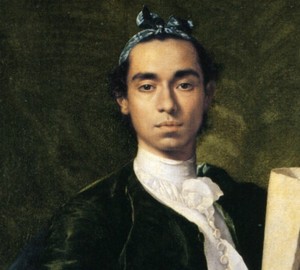 Sunny and hot Spain gave the world not only famous portraitists. Among the masters of the still life stands a Spanish painter of the mid-eighteenth century, Luis meléndez. He created genre paintings, impressive realism and virtuoso mastery of the brush. But, as often happens in an artistic environment, full of scenic gift of the master was not appreciated as it should during his lifetime. The result is always haunted Melendez poverty and irrelevance. We can say that during the life of the artist has not found the recognition he deserved. In our days most of the surviving paintings by the master are stored in one of the most famous and popular museums of Spain, Prado.

The talented artist was born in 1716 in Naples. His family had a direct relationship to the world of art, so painting, as they say, was the boy’s blood. His father was an artist of miniatures, and his uncle, the brother of the father — portraitist. The latter was more fortunate in terms of career — he became court painter and lived in the capital, Madrid. The father of the future masters moved to Naples, then part of the Spanish territories. There he found his love in this city and was born Louis, but still in its infancy, he and his parents returned home.

At first, the boy studied painting with his father, and then got into the Studio to van Loo, who was then very popular. It is not surprising that early in his artistic career working Melendez had a strong influence of the style of van Loo, because for many years he copied his work for representatives of the nobles and courtiers.

With the opening of the Madrid Royal Academy of San Fernando and the teacher and his talented pupil got involved in the governing bodies of the institution. Specialization Melendez in a still life were not considered by the Spanish artists as “low” genre, as it was then customary among the French. Although the master and preferred to write “inanimate nature”, he had good taste and a definite gift of portraits. This can be seen a portrait with the pencil drawing in hands.

On the canvas captures a young southern man with expressive looks and a proud bearing, with fine black eyes, simple, but elegant and sophisticated suit. White shirt and vest perfectly set off the dark satin suit and make the portrait a vivid and expressive.

But the time of prosperity ended quickly when, due to strife at the Academy its walls left first the father and then the son of Melendez. From that time financial were both very limited.

Four years Louis spent in Italy, where he was engaged in restoration of those killed in the fire manuscripts.

Then the artist returned to his homeland, where he created still lifes, which immortalized his name. They are now in the Prado Museum. But financially they are not enriched in the wizard. The absence of a wealthy patron led to the fact that until the end of his life, a talented painter, he lived pretty poorly.