“Lunar Night at Capri”, Ivan Aivazovsky – overview of the painting 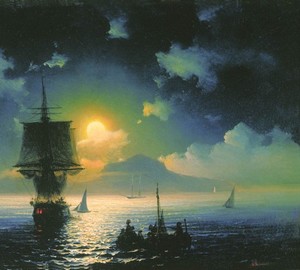 Moonlight night at Capri – Ivan Konstantinovich Aivazovsky. Oil on canvas. 26 x 38.5 cm
With its small size, this picture strikes the scope and magnitude of the captured scene. A large ship with dissolved sails heads towards a hospitable beautiful island – a favorite vacation spot for Roman emperors and subsequent numerous rulers. The island itself is visible in the distance, its outlines are clearly visible against the background of the dark sky and the sea, brightly lit by rays of the full moon.

A small boat has set in the foreground of the large vessel, perhaps this team is going ashore or local merchants sailed to sell their products to seafarers or deliver them water and food. In the foreground is another low boat with people who are carefully looking towards a large ship. It can be assumed that there is an important person on this ship who is interested in the arrival of local residents or fishermen who sailed past.

This ship is not alone off the coast of Capri. A double mast ship with folded sails is anchored in the long run, it seems to be on a raid. Along the entire coast, several small sailboats were scattered – the fishermen went out to night fishing, which is rich in the local coastal waters.

Impressive color scheme of the canvas. A huge pictorial task is solved with a rather modest and restrained palette. All shades of blue and blue prevail, and the cold yellow light of the moon gives the desired degree of contrast, pouring the surroundings of Capri with its radiance.

The night sea is quiet and calm, a little rippled. It is decorated with a blurry path of moonlight, giving a canvas perspective and volume. The same thing is done and the masterly depicted clouds – large, fluffy and light, they, like theater curtains, frame the picture of a quiet moon night on the blessed island of Capri.