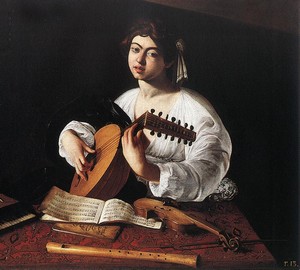 The work of the famous Italian artist Michelangelo Merizi da Caravaggio influenced the development of world art, giving rise to a galaxy of imitators and followers, the so-called caravajists both in native Italy and in other European countries. The master developed new forms, ideas, images, themes and sharply broke with the strict academic canon that dominated Italy. The emotionality of the works of Caravaggio reinforced the innovative introduction into the picturesque grudge of an image of artificial or daytime light that permeates darkness and brightly tears out individual figures and objects from it.

The artist, who had a very harsh character, led a life full of adventure, while at the same time creating beautiful paintings. He wandered and hid a lot, he had to leave his hometown after the murder in a fight.

The master wrote paintings on various subjects, created portraits, religious paintings and everyday scenes. “Lutnist” is one of the early works of Caravaggio, the image of a musician will meet more than once in his paintings. The face of the model is devoid of classical beauty: a round oval of the face, sensual chubby lips and dark big eyes create the image of a healthy, flowering young man. Particular attention is paid to still life. The artist with great pleasure writes bright flowers and fruits, wooden musical instruments.

Probably the Lutnist is a portrait of a friend of Caravaggio, Milan musician Gallus, whom he met during his wanderings.