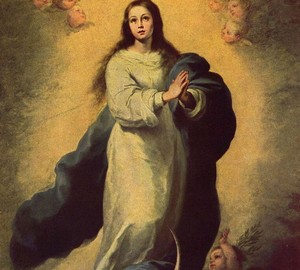 Murillo was born in Seville in 1618. Little is known about his early life, except that his parents died early, and he went to live with artist Juan del Castillo (1590-1657), who became his teacher. Castillo’s works are performed with naturalism, which appeared from Venetian influences on his work. In the first paintings of Murillo, the influence of Castillo and Surbaran is felt. When he finished his studies, he did not choose the traditional way of entering the craft workshop, but chose to remain independent. There is a version that he sold his miniatures made on rough canvas at fairs.

His works must have attracted attention because he soon received an order for a series of 11 religious paintings from the Franciscan monastery in Seville. The successful completion of these works created Murillo’s initial reputation as an artist. It is difficult to arrange the work of the painter in chronological order, since he rarely dated them, but it is believed that a series of these paintings dates back to about 1646. Next was a couple of paintings for Seville Cathedral, which strengthened the reputation of the author. Murillo began to specialize in two topics: “Two with a baby” and “Undless conception.”.

“Madonna Immakulata” was written around 1660-1665. A painting full of trepidation, religious reverence was created for the De los Venusables Saserdotes hospital in Seville. The work is done with subtle, barely noticeable strokes, which gives special tenderness, sophistication, fragility to the image. Soft light forming a warm halo around the Madonna, and a deep palette of colors create relief, revitalizing the canvas.

The Virgin is portrayed as a very young girl. She has gentle features, her face still keeps child swelling. The white outfit, covering everything except the head and feet, symbolizes the modesty, innocence of the girl. The position of the hands speaks of humility, faith, acceptance of one’s destiny. Her figure, located in the center of the canvas, is framed by angels.

The composition corresponds to the Spanish canons of religious painting of that time. But the author brings his vision, his own religious feeling. Murillo’s style is softer, more tender, more sentimental than that of contemporaries who wrote on the same topic. The picture leaves bright, pleasant emotions.