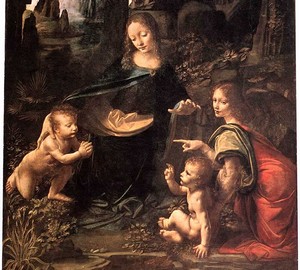 Apparently, the creations of Leonardo da Vinci (1452-1519) are doomed to endless discussions about their content, history of creation, subsequent fate, writing technique, genesis and influence. The painting “Madonna in the Rocks” is no exception: is it associated with earlier Louvre work (1483-1484 / 85), why did the master decide to write this plot again, create its second option (serious researchers do not call this canvas a copy)?

In the original, the artist developed a plot commissioned by the Franciscan monastic Brotherhood of the Immaculate Conception of the Virgin Mary for the chapel of the Church of San Francesco Grande in Milan (documentation of conditions and all stages of work has been preserved). The painter depicted Madonna, the Baby Christ, who raised his hand in the blessing gesture, the little St. John and the archangel, most likely Uriel associated with him. The National Gallery stores two panels for this plot with the image of music-seeing angels, but initially they belonged to the Louvre painting.

The iconography of the canvas is rich and complex. Perhaps Madonna is shown in the rocks in connection with Franciscan theology, as St. Francis received his stigma by praying to Christ near the mountain with cracks and crevices. And this is only one hidden meaning of an individual element, which is many in the work.