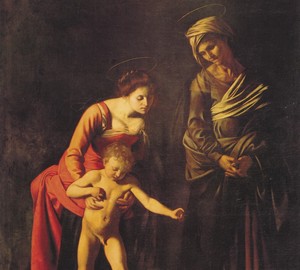 The image of Our Lady with Christ and St. Anna Caravaggio wrote on the orders of the papal stables (from the Italian “palafrenieri” – “condoja”) for the main altar of the Church of Sant Ann near St. Peter’s Cathedral in Rome. The second name of the picture was obtained due to the fact that a snake is depicted here – a symbol of evil, which is violated by Mary and Christ.

In the cathedral, the work of a master whose art went beyond the canons was only a few days away. It happened more than once with Caravaggio that because of the discontent of the clergy, his works left the walls of the temples and settled in private gatherings. In this case, the picture was in the collection of Shipione Borghese. The reason she was removed from the church was most likely the following: the artist portrayed Anna, Maria and Christ with such courage and such a realistic approach to creating images as if he wrote one of his unfamiliar and poor contemporaries.

“He believes that… nothing could be better than following nature, ”the contemporary, Dutch artist and art historian Karel van Mander wrote about Caravaggio in a mature period. “It appears from this that he does not make a single brush stroke without not studying the life that he copies and writes.”. But it was precisely the addiction to the truth of life, the desire to bring the divine closer to man, and was the innovation of Caravaggio, which stirred up the art of European artists.

However, Caravaggio perfectly knew how to “surrender a presentation” of his scene as a real baroque artist, one of whose instigators he was. And his manner of “tenebrozo” (translated from Italian – “gloomy, dark”), when a ray of light cuts through darkness and illuminates the characters, strengthens the moment of the theatricalization of the depicted.