“Madonna with a baby and a spinning wheel in the form of a cross,” Louis de Morales – overview of the painting 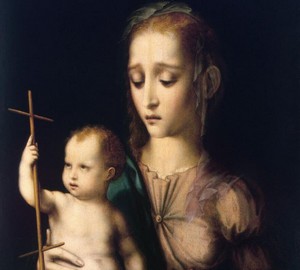 Madonna with a baby and a spinning wheel in the form of a cross – Luis de Morales.

The Spanish artist Luis de Morales is known primarily as a bright representative of manierism, with its own style and rarest identity. The overwhelming majority of the Morales canvases are religious in nature, while having a very pronounced imprint of Spanish folk culture. This is expressed in a special picturesque manner: biblical images are modern, elongated elegant faces are realistic in expressing mournful feelings, and gestures are soft and lacking sharpness.

One of the most famous paintings by Luis de Morales is considered “Madonna with a baby and a spinning wheel in the form of a cross” – in it you can also notice a bizarre mixture of folk beliefs and Christian traditions. Towels depicts the Virgin, holding the baby Jesus on his lap. In the baby’s right handle, a spinning wheel is visible, created in the form of a wooden cross, while the left holds a small spindle tightly. Veretena, as well as gingerbread from pagan times, were revered as the most important symbols of life and the spinning of human destinies. The eyes of Jesus are fixed on the spinning wheel and in this pure, smart, calm look a deep understanding of the responsibility entrusted to him for humanity is read. The spinning wheel in the form of a cross and is believed, in this context, symbolize the conscious spinning of the thread of life and the humble acceptance of their destiny by Jesus Christ.

Maria’s face, on the contrary, expresses a whole range of conflicting feelings. In the facial expressions, you can notice a number of emotions: from maternal love to sincere grief and sorrow. The eyebrows are raised mournfully, the gaze is full of anxiety for the son, and the corners of the ajarty mouth are tragically lowered. The depth and importance of the moment is emphasized by the muffled, gloomy color palette of the picture – only the transparent images of Our Lady and baby Jesus emit a barely visible glow, contrasting with the surrounding dark background.