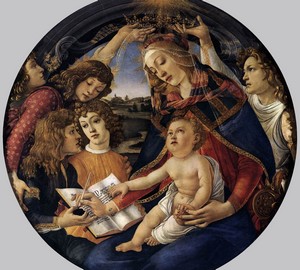 “Magnificat” is the name of the Catholic laudatory song of the Virgin Mary, given to this praise on the first line: “Magnificat anima thea Dominum” – “My soul magnifies the Lord”, so the picture has a second name, which translates as “The Magnificat of Madonna”. At Botticelli (1445-1510), the Mother of God holds a pen in his hand, preparing to trick him into ink and further write in the book the words from the Gospel of Luke, on which chants are written.

The form of the Tondo – a round picture – especially suited the painting of Botticelli with its smooth, flowing lines, bends of bodies, inclined heads of characters. In this case, the artist gives the whole composition rounding outlines that are formed by the poses of Madonna and the Baby, inclined by an angel on the left, met at the top with the hands of the angels holding the crown and laying it on the head of Mary. In addition, the whole group is placed against the background of a round window, the landscape behind it is also strangely bent, as if reflected in a convex mirror. This is one of Botticelli’s most lyrical works, where music is embodied in composition, rhythm, colors, lines and facial expressions.