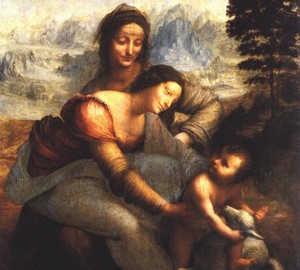 Madonna with Baby and St. Anna – Leonardo da Vinci. Around 1510

Before us is the Leonardo da Vinci canvas (approx. 1510) on the popular plot of the Holy Virgin with the Baby Christ and her mother, St. Anna. The location of the figures in the family group differs from earlier static compositions. All the first years of the XVI century. Leonardo da Vinci worked on the options for this plot: a drawing with a slightly excellent interpretation of the group, including St. John the Baptist in infancy (National Gallery, London), as well as the now-lost cardboard that caused sensation when he was exhibited at the Annunciation Monastery in Florence in 1501.

Although sv. Anna is depicted in her usual place, behind the Holy Virgin, all three figures are very lively and realistic. Moving away from the tradition of portraying Anna in the form of an elderly matron, Leonardo da Vinci wrote it unexpectedly young and attractive. She barely holds back her glee at the sight of the Baby. The ill-fated lamb in the arms of the Baby serves as an allusion to its future role as the lamb of God, an innocent sacrifice for the atonement of sins; nevertheless, the symbolic meaning of this lively family trio against the background of a smoke-turned landscape is insignificant.

SV. ANNA. Anna’s cult (I c. n. e.), the mother of the Virgin Mary, went to the West with Christian refugees persecuted by Muslim conquerors. Her earliest image (approx. 650 g. n. e.) appeared in the church of Santa Maria Antiqua, in Rome, where she is depicted with the Holy Virgin. Around the XIV century. sv. Anna was already a popular figure, in part because her motherhood at a late age confirmed the doctrine of the immaculate conception of the Holy Virgin. Usually she is portrayed with her daughter. Legend has it that she was married three times and had three daughters. In the Middle Ages, she was portrayed along with a large family, the so-called Holy Family, various artists, for example, the Master of St. Veronica. In 1479. the monks of the Carmelite Order in Frankfurt formed the brotherhood of St. Anna and ordered the altar dedicated to her, on which the siens from her life were depicted.