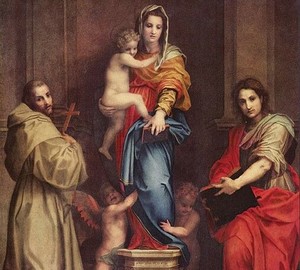 Madonna with Baby (Madonna Garpie) – Andrea del Sarto. 1517. Oil on canvas. 207×178
Andrea del Sarto (1486-1531) worked at a time when the painting of the Renaissance was at its zenith, so the artist’s work carries all the features of that art. This was especially manifested in harmony, the elevation of images in paintings. But at the same time, the works of the master show signs of already nascent manierism: elongated figures, a clear “decency” of scenes, an emphasized grace of postings and gestures and a barely perceptible “sweetness”, which marked the appearance of the characters.

The presented work was done for the Church of San Francesco in Florence, so St. Francis is also depicted on the canvas. On the right is St. John the Evangelist. The name of the picture is associated with strange winged creatures carved in high relief on the pedestal. Giorgio Vasari believed that these are harpies – monsters from Greek mythology, birds with the heads of women. But most likely this is an image of locusts from the Apocalypse, as indicated by the figure of John the Evangelist, in whose revelation it says: “And locusts came out of the smoke to the earth, and power was given to it, which the earthly scorpions have” (Revelation 9: 3). Having portrayed the Mother of God standing over the symbols of future calamities, the artist emphasized her role as the savior of the righteous.