Madonna with the Baby and the Saints (Altar Colonna), Raphael 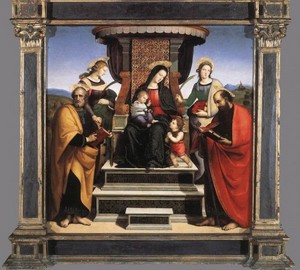 The painting is the early work of Raphael, whose work is one of the peaks of the Italian Renaissance, and was originally located in the monastery of St. Anthony of Padua in Perugia. The image of Madonna with the Baby and the upcoming saints was the central part of the altar, which in 1678 fell into the meeting of the Dukes of the Column in Rome. Hence the second name of the work is “Altar of the Column”.

The altar was probably created at a time when Raphael was still in the workshop of his teacher Perugino. The influence of this artist and painting of the previous century. Quatrocento, both in the iconography of the Madonna, sitting on the throne under the canopy, and in the complex multi-figure composition of the “holy interview”, which unites around Our Lady with the Baby of Saints Peter, Paul, Catherine, Lucia (or Cecilia) and little John the Baptist. But in the work, the desire to give the figures majesty is already noticeable and at the same time to endow them with a common harmonious mood, fill their faces, gestures and postures with unearthly calm. All this, perfected, will become a feature of Raphael’s painting and wider – the High Renaissance. And Madonna with the Baby Christ and the little John the Baptist is one of the artist’s favorite topics.