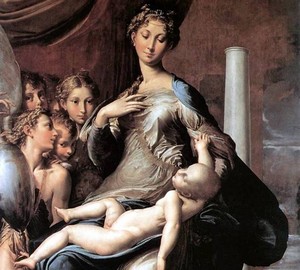 One of the leading artists of manierism, Parmidjanino (1503-1540), as opposed to Renaissance masters, sought harmony in deliberately modified figures and objects drawn and as if gravitating to infinity. The painting “Madonna with a Long Neck” was written by a master commissioned by his friend’s sister, Elena Bayardi, for the Church of Santa Maria dei Servi in Parma.

The bodies of the depicted are elongated (hence the second name of this work) and are wave-shaped curved. This is especially evident in the figure of the angel standing in front. The feeling of the immoral, magical that this work causes is amplified, the cold, paint casting with mother-of-pearl, as well as the figure of St. Jerome too small compared to the rest and the unfinished either on purpose or because of the death of the master, the architectural background, where the columns were not carrying anything. And at the same time, a single column takes on special meaning here as a symbol of perseverance.

On the vase in the hands of an angel is the Crucifixion. The theme of future torment and the death of the Savior is embodied in the pose of a sleeping Baby, reminiscent of the iconography of the play – the image of Our Lady mourning the dead Christ, whom She holds on her lap.