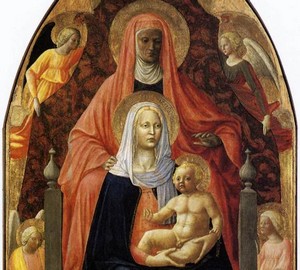 The brush of Mazolino in this work, performed for the Sant Ambrojo Church in Florence, belongs to the image of St. Anne and the Angels, and Mazaccio (Tommaso Di Giovanni Di Simone Cassai) – Madonna with Baby and an angel in green with red robes.

The influence of medieval art is visible here in a golden background, curtain, iconography of the whole scene – in front of St. Anna sits Mary with little Christ on her lap, and on the sides are angels placed above each other. But this is already a Renaissance work, especially where the brush of Mazaccio worked, which was the first of those who can be entirely attributed to the Renaissance masters. The figures written by him are illuminated from the side and depicted with knowledge of the perspective, the study of which the artist was engaged. He stops his attention only on the main thing, so in the created images there is power, which soon appeared in paintings made by the artist in Florentine churches. Mazaccio did not live long, but managed to influence all the Renaissance painting.