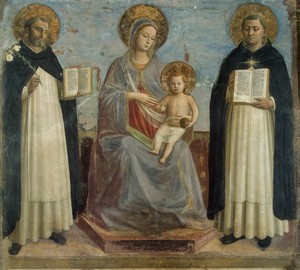 The Italian artist and monk Fra Giovanni da Fiezole was nicknamed Beato Angelico (Angelsky). Like no one else, he knew how to convey soft lyrism and a special subtle atmosphere of evangelical subjects.

The fresco “Madonna with the Baby, St. Dominic and St. Thomas of Aquinas” once adorned the wall of the Dominican monastery in Fizzols, but after its abolition was cut out of the wall and sold to two Italian artists. Work belongs to the late work of the master.

The images of the saints are surprisingly harmonious and consistent. In the center, Madonna sits with the Baby, to her left is St. Dominic with a lily in her hand, a symbol of purity, on the right is St. Thomas Aquinas with an open book of scripture. In the works of Fra Beato Angelico, the realistic achievements of the masters of the Giotto circle and the soft, soulful images of Simone Martini organically combined.