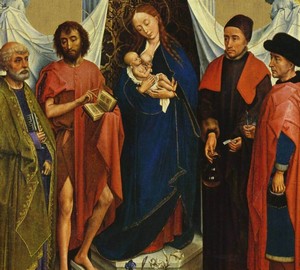 Rogir van der Weiden, returning from Italy, writes several works on orders of the Italian nobility. It is believed that this altar was written for the rulers of Florence – the Medici family, whose patrons are Saints Cosma and Damian.

Her plot is unusual, because at the beginning of the 15th century, artists very rarely wrote paintings on the topic of conversation. Before us is one of these images – Madonna and the baby are surrounded by saints.

On the left, the apostle Peter stands in an olive-green cloak, holding large silver keys with an intricate groove in his hands. He is no longer young, gray hair and a beard frame a dark face, living eyes glow with wisdom. Peter carefully listens to the reasoning of John the Baptist, standing next to the scarlet. The dark brown hair of a saint is emphasized by a exhausted face, windy cheekbones and dark shadows around the lowered eyes. But in his face is a firm confidence in his words. In proof of his innocence, he points to the lines in the holy book, which he carefully holds, covering his hand with a hollow cloak.

And on the right side of the picture are healers, saints Damian and Kosma, who take part in the conversation. They are dressed in costumes of wealthy citizens of the Renaissance, and the objects that they hold in their hands: a glass vessel, a box with medicines, lancet, indicate their profession.

Between them, under the swollen canopy of the tent on the marble steps stands Madonna, feeding the baby. The bright blue color of the robe emphasizes the fragile beauty and gentle radiant skin color of a young woman. Admiring a baby, she affectionately presses him to her.

Returning to Gothic traditions, the painter leaves the background golden. At the same time, he uses many shades of juicy, bright colors that fill the image with light, lightness and joy.

But like any altar picture, it also contains many symbols: flowers of lily and iris, meaning purity and integrity of the Madonna, subtle halo of the saints as a sign of grace, and a book speaking of the Divine Word.

The picture does not leave indifferent, the warmth and sincerity with which the artist wrote it is felt.