Madonna with the Saints – the altar of San Jobbe, Jambellino 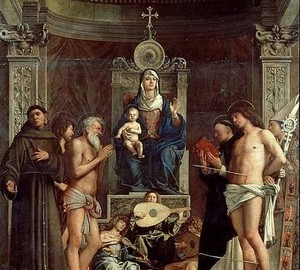 Madonna with the saints. Altar San Jobbe – Giovanni (Jambellino) Bellini. 1478-1488. Wood, butter. 471×292
Bernard Burnson called Giovanni Bellini the greatest Venetian master of the 15th century. The artist began to write around 1449, and ten years later he stood at the head of a large workshop. By the time the altar was created for the church of San Jobbe (St. Job), his manner of writing was already formed.

At the foot of the high throne, on which Madonna solemnly sits with the Baby, blessing those who came to bow to her, are music-seeking angels (the holy Job was considered one of the patrons of music). Their robes are sky-blue, sunny-yellow, the colors of juicy green – gleaned with precious overflows, movements that extract heavenly sounds are full of elegant harmony and create a virtual circle. Its lines expand from the top of the huge board to the periphery, echo a round “rose” above Madonna’s head and, together with the abris of the arch, apse and canopy, sound like a powerful chord.

The figures are made in full size. Bellini placed two naked saints, Jobbe and Sebastian, on the flanks of the throne of Mary, next to them are the saints of John the Baptist, Dominic and Louis of Toulouse. The architecture and decor of the apse, along the covered gold greel, resembles the Cathedral of San Marco. Against a golden background, the words are clearly read: “Ave, a pure flower of virgin chastity.”.

The composition was ordered by the artist by the church of San Jobbe and San Bernardino, in Canaredjo. It is believed that this was due to the plague sea of 1478.