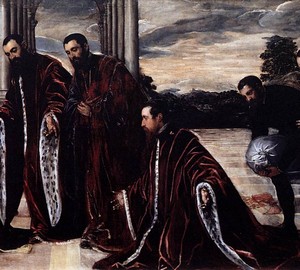 As in many other dedication (active) canvases of the Italian Renaissance, here Tintoretto (1518 / 1519-1594) traditionally combines a sacred plot with portraits of real people who were customers of the picture. These are the treasurers of the republic – Michele Pisani, Lorenzo Dolphin and Marino Malipiero. Under their emblems, merged into a single field in the left corner, there is a Latin motto: “unanimas concordiale simbolus” (“symbol of unanimous consent”), and date-1566, significant for Tintoretto. This year he was admitted to the Florentine Academy of Drawing along with other Venetians – Titian, Palladio, Sansovino and Salviati. It is assumed that the work itself was written a little later, and by that time the service depicted on it Malipiero was already completed.

The three state-owned men of Venice, vested with financial authority, impeccably honest in the performance of responsible duties, in their worship of Maria and the Baby at the same time thank Madonna for the heavenly patronage, and as if they were devoting her to the results of their works in the name of the welfare of the Republic. According to B. R. Wipper, Tintoretto attracts not so much bodily as emotional, not sensual, but the socio-ethical appearance of a person. It is this spiritual kinship that unites such different portraits of the master. It is interesting that the portrait here are not only images of donors and secretaries with bags of money, but also saints – Sebastian, Mark, Theodore.

The black robes of heroes emphasize the noble beauty of the canvas – a high example of Venetian colorism with its decorative and expressive power.