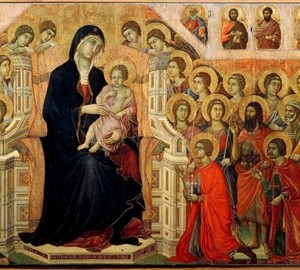 Maesta – Duccio di Buoninsenya. 1308-1311
Duccio wrote his masterpiece “Madonna on the Throne” in the form of a polyptich (screen) for the main altar of the cathedral in Siena, where it was installed in 1311. to the enthusiastic screams of the townspeople. The theme of Maesta – Madonna and Baby, sitting on a throne surrounded by a celestial retinue – was very popular in Italy of the XIII-XIV centuries., and the famous work of Duccio played an important role in establishing this tradition. Although the golden background of the picture, the pose of Madonna with the Baby, skillful work throne, portraits of 10 of the 12 apostles in the niches of the upper row, looking directly at the viewer, — all this testifies to the copying of the Byzantine iconopis canon by early Siena painters, but the location and individualization of saints and angels around the throne — features of a fresher, less indirect approach. Madonna and Baby for all solemnity are more lively than in the earlier images of Madonn; faces are already more open, rounded and alive; the expression of devotion and sweet piety in the faces of saints and angels is surprisingly subtlely conveyed. Maesta Duccio was conceived as an expression of his urban patriotism: the four holy patrons of Siena – Anzania, Savino, Crescentio and Vittor – kneel in the foreground, and the Latin inscription on the throne elevation sends a request to Madonna to grant peace to Siena and life to the artist.

In the second row behind the kneeling saints, on each side of the throne there are two angels (near the throne) and three saints each. From left to right are depicted saints: Catherine of Alexandria, Paul, John the Theologian (on the right hand of the throne), John the Baptist, Peter and Agnes – all of them are easy to recognize by their characteristic attributes. The upper part of the composition (from left to right) depicts ten apostles, namely: Judas, Simon, Philip, Jacob the Elder, Andrew (on the right side), Matthew Mytar, Jacob the Younger, Bartholomew, Thomas and Matthew. The name of each apostle is given in abbreviated form.

APOSTOLS. After the resurrection of Christ, 11 of his 12 disciples became apostles, t.e. preachers of his teachings: Andrey, Bartholomew, Jacob the Elder, Jacob the Younger, John, Fadday, Matthew, Peter, Philip, Simon and Thomas. The first missionaries Paul and Barnabas are also sometimes called apostles.