“Magomet on Mount Hira,” Nikolai Rerich – overview of the painting 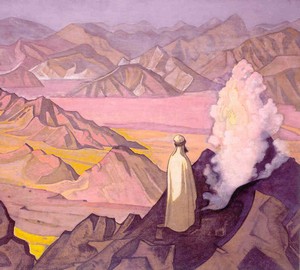 The presented picture is included in the famous cycle of Nicholas Rerich “The Sign of the East”, which he created by making an amazing journey in complexity and volume to the East. In addition to Mohammed, in this series of works, the artist remembered Confucius, Buddha, Moses, Iano Guyo Dia, Nagarjuna, Lao Tzu and other famous historical figures. The series serves as the visual embodiment of Rerich’s attempt to comprehend the essence of outstanding people, as well as the spirit of the people to which they belonged.

Mohammed is the central person in Islam. It was he who gave the world the Qur’an, having received a revelation from Allah. Rerich decided to devote his picture to history when Mohammed near Mount Hira saw the angel Djibril (Gavriel). In the travel diary, Rerich described the purpose of the work: the angel gives Mohammed truth and tells him that he is destined for the role of the messenger of God.

At first, Rurich sketched with a pencil, where the main element was the clubs of smoke, from which the weightless, shaky figure of Jabril protrudes. That is what became the main grain of the finished canvas – an angel indicating the chosen nature of the hero. Rerich depicts Mohammed with his back to the audience and this is not an artistic technique, but a tribute to the Islamic religion, which prohibits the image of the Prophet.

Landscape attracts attention with its expressiveness: it seems like an abundance of rocks, mountain ledges, and here clearly there is a ringing silence. As if everything froze, understanding the fate of what is happening.

Color paintings are warm, tender pink tones, sunny yellow predominate. The author works with large thick color spots. It is known that from a certain moment, Rerich refused oil paint, preferring to tempera, because the latter has more brightness and does not darken over time.

The technique of Rerich is transparent and understandable – clear lines without reflective transitions, sweeping, filled with smears without jerks. The work is revealed to the viewer with all clarity of purpose, erasing temporary, religious and cultural boundaries.

It was in the East that Rerich found confirmation of his main idea of the inextricable connection of all mankind. He rejected the common opinion about the isolation, privacy and even detachment of the East and Asia. To tell about the world that captivated him so much, to explain that everything is interconnected, Rerich tried in the only way available to him – through art. And he succeeded a lot. Do we, representatives of the Christian faith, not look with interest and experience at Mohammed, who receives a sacred message from God: “Magomet – you are the messenger of God!”…