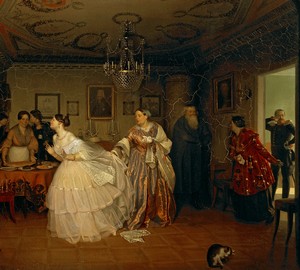 The matchmaking of the major is Pavel Andreevich Fedotov. Oil on canvas. 58.3 x 75.4

The founder of critical realism in Russian art P. AND. Fedotov introduced drama and plot acuity into the everyday genre. In his works, the artist managed to combine the exposure of social and moral vices of society with subtle psychology and poetic perception of reality.

In the picture “Major’s match”, the action is played out in front of the viewer as a comedy eyeballs. House of the fat-trow merchant. The modest atmosphere of the living room does not even hint at the true dimensions of the host wealth. “Capital is a hidden thing” is the golden rule of merchants.

Everything is ready for the meeting of the long-awaited guest – the noble groom. The maid finishes setting the table, the bride put on a highly decolted ball gown that does not correspond to a deliberately boring setting, jewelry sparkles on her arms and neck. Dressed up according to the solemn occasion and her parents. Fedotov showed not the matchmaking itself, but the preceding moment. The matchmaker, who entered the room, informed the owners that the man’s hand challenger had arrived. He appeared at a full parade, wanting to make a “needed” impression on future relatives.

The arrival of the brave major led to the excitement of the inhabitants of the house. Every man, located in the room, in its own way responds to the words of the matchmaker: a young coquette seeks to slip out of the room, demonstrating concurrent modesty, however, the mother manages to grab her by the dress; the cook is looking at them carefully, putting snacks on the table, two household men whisper behind her back; the father of the family is in a hurry to meet the guest. And only the cat in the foreground remains indifferent to what is happening.

In this work, the use of the reception favorite by the author is especially clearly visible – the contrast of movements (hidden and explicit). In other words, a brief moment from the kaleidoscope of rapidly changing events was seized on the canvas, but the viewer seems to know what exactly will happen in the next moment. In such a compositional building there is some share of theatricality through which the artist emphasizes the false and false brilliance of what is happening.