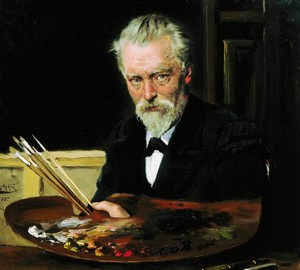 Makovsky, Vladimir Egorovich belonged to the artists and the Wanderers, famous paintings of genre. He was born in 1846 in Moscow. His father, an accountant, was a devoted art lover, and his mother was a singer.

Family Makovsky was distinguished by the hospitality they enjoyed visits by musicians, writers, artists. Vladimir with his brothers and sister grew up in an environment conducive to creativity. The first drawing lessons he was taught by V. A. Tropinin.

In 15 years the young man entered the Moscow school of painting and sculpture and graduated with a silver medal. After that, Makovsky went to St. Petersburg and entered the Academy of fine arts. Three years later he received a gold medal.

At 23, the artist married to A. P. Gerasimova. The couple had two boys, Alexander and Constantine. In the future one will become a painter, an architect second. Biography of the artist’s brother, Konstantin Egorovich, we covered here.

To feed his family, the Makovsky had a lot of work. He took any orders: painted printing editions, painted icons, painted the room.

In 1872 V. Makovsky joined the Association of artists of the Wanderers. Painters, inspired by the ideas of populism, in his work raised acute social issues. As opposed to formal academic Wanderers promoted realism. Makovsky has actively participated in exhibitions of the Association, and even became a member of its Board.

Makovsky’s painting enjoyed great success with the public. His work is reminiscent of early stories of A. P. Chekhov – in one climactic scene, he manages to reveal the character of the heroes, to tell their fate, and something to leave to the conjecture of the viewer. Some subjects of paintings Makovsky lyrical, others tragic and some ironic. Being a careful observer, the artist was noticed around themselves the future heroes of his works. Contemporaries knew perfectly well what he wants to convey to them the author, because the stories were dictated by life itself.

For his work, “Lovers of singing nightingales” V. Makovsky received the award and was awarded the title of academician. This painting was exhibited in Vienna and was a great success.

Painter was also concerned with the political processes in the country. He wrote several works on the topic of the persecution of revolutionaries-populists: “Parties”, “Waiting”, “Convict”, “Justified”, “the Prisoner” etc. These works caused a great resonance in society.

Since 1882 by Makovsky for 12 years and is currently a senior lecturer at the Moscow school of painting, sculpture and architecture.

In the 80-ies the artist is drawn to topical issues: the plight of the peasants and the common people. He wrote such films as “the collapse of the Bank”, “Boulevard”, “medicine”, “Rooming house”, “Date”, “Visit the poor” etc. All these works show the brutal unvarnished reality.

Every year Makovsky travels to Ukraine, to Crimea, to the Volga. These travels give him new experiences and stories. Especially the artist was fascinated by Ukrainian nature and culture. They created such heartfelt films as “Mother and daughter”, “Girls, illuminated by the sun”, “a Sermon in a Ukrainian Church,” “the Bachelorette party”, etc.

Engaged Mr ye and illustrate the works of Gogol, Pushkin, Lermontov. His drawings are quite accurate characters and emotions of the characters. The artist especially liked the “Dead souls” by Gogol. He illustrated several times.

Makovsky was a great lover of music. His special love was the violin. He even bought a rare tool made by Guarneri. Though he played only for himself and house concerts.

In 1894 Vladimir Makovsky moved to Saint Petersburg. He was offered a position teaching a class of genre painting at the Academy of fine arts.

The artist witnessed the tragic events on Khodynka field in 1896. During the celebrations of the coronation of Nicholas II, in a stampede that killed many people. The result was the painting “the ice Palace” and “Vagankovskoye cemetery”, which immediately became prohibited.

Produced on the artist impression and the revolution of 1905. These events were reflected in the paintings “Interrogation of a revolutionary” and “09 Jan 1905 on Vasilyevsky island”.

After the 1917 revolution, Vladimir Egorovich new government appointed a pension, but the artist continued to work, depicting the reality of Soviet Russia. Makovsky died in 1920, leaving behind a rich artistic heritage.