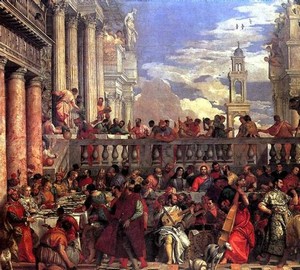 Paolo Veronese (1528-1588) is one of the most prominent painters of the Venetian school.

On the canvas “Marriage in Cana of Galilee” is depicted Christ on a wedding feast in the Galilean settlement of Kana at the time of the fulfillment of his first miracle: when the wine ended, He turned water into it at the request of the Mother. Among the guests were several students.

The community of the Benedictine Monastery of San Giorgio Maggiore in 1562 ordered a picture for this plot by Veronese. The master worked on her for more than a year. In the refectory monastery, for which the canvas was created, it hung until the conquest of Italy by Napoleon. To make it convenient to transport the canvas, the French cut it in half, after which they sewed it already in Paris.

Freely interpreting the biblical plot, Veronese turned it into a holiday of the Venetian wedding. The New Testament event is presented in luxurious architectural “decorations”, which could not have been in a Galilean village at the dawn of the Christian era. They resemble the buildings of Andrea Palladio, the architect of the late Renaissance. Some figures are dressed in historical clothes, while the costumes of others amaze with the luxury and splendor of a completely different era. Bible heroes are surrounded by contemporary artists. According to legend, a musician in white clothes in the foreground of the picture is the master himself.