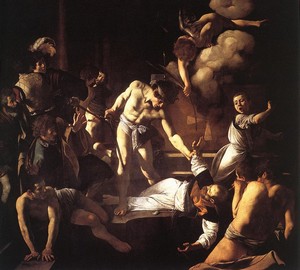 The martyrdom of the apostle Matthew is Michelangelo Merizi da Caravaggio. 1599-1600

This large dramatic canvas was written in 1599-1600. for the Contarelli chapel at the Church of San Luigi dei Francesi in Rome. The powerlessly hanging hand of the saint and bizarrely lit figures in the foreground bring the viewer’s eyes directly to the scene of violence. The coverage of the two central figures underlines the powerful contrast of the muscular body of the executioner and the helpless old man who was melted on the ground in the clothes of the priest. Matthew’s body with hands divorced to the side, as it were, forms a cross at the executioner’s feet. The invisible executioner is held out by the holy palm branch, a symbol of martyrdom, which he is trying to seize.

SV. MATPHEW. The attribute of the apostle Matthew, or Levi, is an angel with wings. Matthew was a tax collector for Roman authorities. But once Christ turned to him, “and says to him: Follow me. And he stood up and followed him. ”. There is no confirmed evidence of his future life, but legend 2 tells him that he preached in Ethiopia, where the king began to harass a simple Christian girl. Matthew condemned him for encroaching on the bride of Christ and as a result died a martyrdom by the sword. Painting masters portray Matthew, as a rule, writing their gospel, usually under the guidance of an angel. With it there may be coins or purses – attributes of his former craft; in Florence, Matthew was considered the patron saint of the bankers.