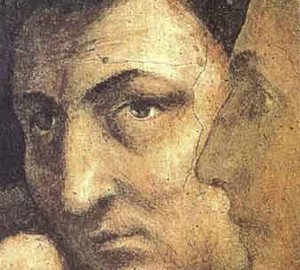 Tommaso di Giovanni di Simone Cassai nicknamed Masaccio was born in 1401 in Italy, in San Giovanni, near Florence. Perhaps that is the place and the period of time when he was born, played a major role in shaping him as one of the most notable and original artists of the early Renaissance.

Information about the life of the master remained not too much. It is known that his grandfather was an artist, a specialist in very popular then the chests, which were called and Cassone were often used as pieces of furniture. Since these chests are magnificently decorated, some researchers of creativity Masaccio believe that some of the skills of his art he could learn in childhood or inherited as an artistic gift.

The boy soon left without a father, and when he died and his stepfather, he was a survivor of a fairly large family. Besides him and mother, it was still the younger brother, also became a painter, known by the nickname Skid (sliver), as well as two stepsisters — daughter stepdad. The name of a brother indicates his possible connection to the family business — the manufacture of trunks.

Himself Masaccio got his nickname (“clumsy, sloppy”) because of its deep immersion in his art. When he did, he was not interested, so his clothes were often stained with paint.

Learning from other major masters of the Renaissance, Donatello and Brunelleschi, Masaccio took the best of the styles of these artists and sculptors have added their own vision of the world and created his own style. He was realistic, and accurately reproduced the appearance of humans, nature and architecture. For comparison, we should add that was in Vogue a romantic, distorted, “Gothic” style of the image.

In his short life Masaccio has created numerous paintings and murals, mostly intended for churches. Widely known for such masterpieces as “the Triptych of St. Juvenal,” “Madonna with child and St. Anna”, Pisa triptych, “the Agony in the garden”, the frescoes of Cappella Brancacci and “Sagra”, or “Lighting” that has not reached our days, absolutely not suitable to the customer — Carmelite monastery, but made an irresistible impact on his contemporaries.

The surviving descriptions, it portrayed a procession of many people, but distinguished by realism and a complete lack of pomposity so characteristic of the ceremonial painting of the century. In addition, many saw in the mural influenced by the Roman sculpture and freedom-loving ideas of Greece and Rome.

In addition to Church painting, there are examples of works civil wing, expertly executed by Masaccio. Portraits, accurately identified by only one of them (“portrait of a young man”), the other two are likely to copy. Despite the classical form of the image in the profile, it has visible characteristics of the image of the Renaissance.

Not being especially popular during the life of the artist after his untimely death at the age of 26 years became a role model for many followers, including such titans of the Renaissance, such as Raphael and Michelangelo. The cause of his death remained a mystery, like his father, who died, being only a year older.