Meeting of Saints Anthony the Great and Paul the hermit, David Tenirs the Younger 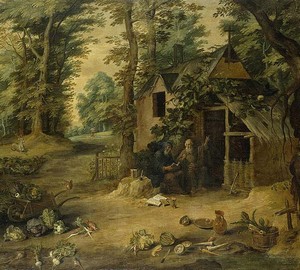 The meeting of the saints Anthony the Great and Paul the hermit is David Tenirs the Younger. Wood, butter. 97.3×157.5

Saint Anthony the Great, or Abbot Atonia (approx. 251/52 – 356), born in Upper Egypt; after the death of his parents, he retired to the desert. Pavel the Hermit, or Pavel Fivansky (d. in 341) – the first deserted of Egypt, living in the vicinity of the city of Fiva. Both Christian saints are known as great hermits. Although they were born and raised in wealth, both left their father’s house to lead a lonely and charitable life. At the age of 90 years of St. Anthony, according to legend (LA, XV), went to look for Paul’s hermit in the Fivan desert, who was then 113 years old.

The meeting of Saints Anthony and Paul became a common plot in Western European painting of the XVII century. One of the most famous examples is the eponymous picture of Velazquez, in which the meeting of two saints is supplemented by an episode of the burial of Pavel the Hermit. In the interpretation of landscapes on the canvases of Velazquez and Tenirs of the 1630s, similarities are observed due to the influence of Flemish landscape painting of the XVI – the beginning of the XVII century.in particular the paintings of Joachim Patinir and Jos de Momer the Younger.

Tenirs several times addressed two main subjects from the life of St. Anthony. For example, in the mid-1640s, he created the picture “The Temptation of St. Anthony, ”on the background of which among the rocks are tiny figures of two shot, Atonia and Paul. A raven flies to them, holding bread in his beak, which, at the command of God, he fed Paul. On the ermitage canvas, the meeting of two saints is not secondary, but the main plot. It depicts large figures of saints sitting in front of the hut and having a conversation. St. Anthony is represented in the traditional black mantle, and St. Paul is wearing leaves. In one hand he holds a staff, the other – we point to the roof of the hut, where the cross and the raven with bread are visible. On the ground, next to the characters, there are hourglass reminiscent of the transience of earthly life. Similar in interpretation and large-scale figures of hermits are depicted in the subscription work of Tenirs “St. Paul and St. Anthony ”from a private meeting in London, performed around 1650. Most likely, an ermitage canvas was created at the same time. Comparable work differs only in the choice of location. In the London picture, the artist, exactly following the legend, showed the desert and mountain ledges. In the ermitage, he transformed the legend in his own way, placing the heroes not in the desert, but in the forest area (with the figure of a traveler in the long run). The painter depicts in detail the details of the landscape: green crowns of trees, a teddy hut, roses beyond the fence and numerous gifts of the earth (cats of cabbage, artichokes, carrots, white turnips, cut melon and watermelon). A variety of objects of labor are also visible on the canvas: ax (at the hut), knife (on the ground), car, shovel. In the interpretation of Tenirs, the fate of the hermit is an example of a Christian lifestyle. Apparently, the artist believed that St. For many years, Paul was tirelessly sad both on earth and in the spiritual field (thinking of God, praying, reading the sacred books depicted next to the hourglass).

Lynnick allegedly named the author of Adrian’s landscape to you, Stalbemt (1580 1662). It’s hard to agree with such a hypothesis. In our opinion, the landscape is completely performed by David Tenirs the Younger himself. The left side of the landscape background of the canvas reveals a resemblance to the landscape written by Tenirs in the right half of the painting “Krestyansky Dance”. While similar landscape parts (with a traveler’s fushure), depicted in the central part of the background on the ermitage canvas, are found, for example, in the right half of the picture “The Peasant Family in front of Your Home” by Tenirs (Rakesmuseum, Amsterdam.