“Meeting of St. Erasmus and St. Mauritius,” Matthias Grunewald – overview of the painting 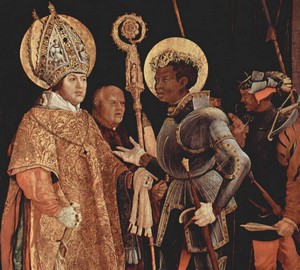 How sometimes time is ruthless … It not only dulls emotions, makes events approximate in our memory, but also completely “locks” names. That is how unfairly the time came with the greatest North Gothic artist Matthias Grunewald. More recently, it has been proven that his name is different – Gothart Nithard.

To date, only about 10 works of Grunewald (Nithard) have come to this day. One of the most famous is the painting “The Meeting of St. Erasmus and St. Mauritius.”. In the 1520s. Albrecht Brandenburg, Erzkantsler and the curfurist of the Holy Roman Empire ordered a painting from the artist.

Albrecht played a big role in popularizing St. Erasmus (left on canvas). The relics of St. Erasmus were transferred to the residence of the Arch Chancellor in Halle. However, Mauritius was considered the patron of this city. Albrecht Brandenburg created a program (theme for the plot) of the work, thereby “reviving” the meeting of two saints. However, the meeting of two spiritual leaders: from the European continent of St. Erasmus, and from the African – Mauritius, cannot be regarded as simply the embodiment of a private case (the transfer of the relics of one saint to a city where another was recognized as the patron). On the world stage of those times, when religion was a power-forming force, there are black and fair-skinned saints who emphasize not only unity, but also the power of Catholicism and the Roman Church.

Erasmus is dressed in luxurious golden bishop’s clothes. Incomprehensible ropes hang on the hand of the European saint, but it is worth learning the biography of Erasmus and everything clears up, forcing something to shrink inside – thus Grunewald depicted the insides of the saint. Martyr Erasm was killed in a brutal way – with the help of a winch, all the insides were pulled out of it.

Opponent Erasma is a typical representative of the African people. St. Mauritius was the leader of the legion, in which only Christians served. That is why the Fivsky legion refused to take part in the reprisal against peaceful Christians. It was over this legion that the famous decimation (the murder of every tenth) was carried out. After all, all the soldiers were killed, as was their leader, Mauritius.

A comparative analysis of the preserved portrait of the Albrecht of the Brandenburg brush of Lucas Kranakh suggests that in the image of St. Erasmus Grunewald depicted the customer of the work, which looks quite logical.

Large picture. It is distinguished by pomp and church luxury. One cannot but note the skill of the Grunewald brush – a filigree game of gold, silver, blue, red colors, well-placed accents, thin color glare (it is not for nothing that the expressionists considered Grunewald their direct predecessor).