Meeting of the Council of Artists, Leonid Osipovich Pasternak 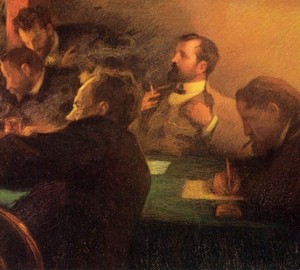 The meeting of the Council of Artists – Teachers of the Moscow School of Painting, Sculpture and Architecture – Leonid Osipovich Pasternak. 1902. Paper, pastel. 65 x 87 cm

This genre picture depicts a scene of a turbulent meeting of the Council of Artists, at which some very important issue is being resolved. It clearly causes diametrically different feelings and attitudes among the participants in the process, so everyone reacts differently.

The most interesting thing about this canvas is that the main character of the canvas – leading this meeting – is outside the picture, we see only those people who communicate with him. This is evidenced by the views and position of people, clearly directed towards the character located on the other side of the table.

Equally interesting is the figure of the person serving the meeting – we see only his hands and a tray with glasses, and the character himself is beyond. Such an extraordinary technique gives the canvas an unusual liveliness and dynamism, which is further emphasized by the active gesturing and posture of most actors.

It is interesting to note that each of the characters in the picture can serve as an illustration of the types of characters: the master with the cigarette calmly keeps some notes, the young man sitting behind him with a small beard and mustache looks melancholy into the space, leaning back of the chair, clearly tired of the noise. Next to him, a man with a cigarette in his hands does not seem to agree with the speaker and is going to object to him. The rest of the characters are actively involved in the conversation, each of them is in an interesting, expressive and very lively position.

The light gives the light a special appeal to the picture. This is saturated, but local lighting from low hanging lamps, which, like some characters, are not visible or only partially noticeable. The light is dense, yellow, it creates deep blurry shadows and makes the space very voluminous. In general, the picture gives the impression of photography – a fragment of real life, taken out of context and preserved for centuries.