“Meeting of the Icon”, Konstantin Apollovich Savitsky – overview of the painting 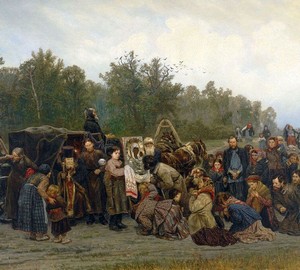 Looking at the picture “Meetings of the Icon” by Russian realist artist Konstantin Savitsky, one cannot help but recall the more famous canvas with a similar plot – the Repinsky “The Way of the Cross in the Kursk Province”.

There are really many common features: a multi-figure composition, the image is not a faceless crowd, but the subtle mental characteristics of each hero, a variety of emotions in relation to the icon. But the differences between the paintings are also obvious. If Ilya Repin depicted a kind of classy cut, from local nobles to the reeds of passers-by, then only the peasants became the heroes of Savitsky, but in all its diversity: men and women, old people and old women, children, frantically believing and restrained in their emotions, silent and leisurely, impulsive and agile. A wide palette consisting of typical and living images.

The crew stops on a wide, wrecked earthen road – this was brought by the miraculous icon of the Virgin Mary. The Holy Face accompanies a representative of the clergy in a dark cassock. The local confessor is dressed simpler – there is no camille on his head, nor epitrachil.

Peasant public is all from the neighboring village – you can notice the straw roofs of the houses in the distance on the right. For residents, meeting the icon is a real event. That’s why they poured onto the road, not allowing them to get to the local church, in a reverent greeting. The shrine is held by a boy-servant. The godfathers rushed to the ground, almost reaching their heads to the ground in a deep bow, men behave more modestly – after gulping their eyes and folding their hands, they look silently at the icon. On the faces of children, curiosity, surprise, and admiration are read simultaneously.

The claws of people meeting the icon are not just poor peasants, but hundreds of hopes, hearts, thoughts, aspirations, requests addressed to the icon in the hope of a better happy life. This picture is an eloquent confirmation of what Savitsky was called “Necrasov in painting.”. So a single artist was not sensitive for the fate of the Russian peasants.