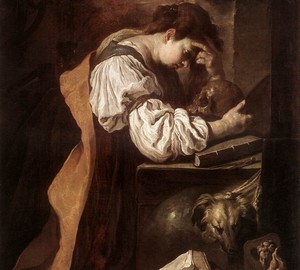 Melancholy – Domenico Fetti. 1615-1620. Oil on canvas. 179×140
In the first half of the XVII century, Venice was visited, admiring its artistic treasures, and artists from other cities and countries willingly worked in it (Rubens, Velazquez, Liss, Van Dyck, Poussin). The Roman Domenico Fetti (circa 1588 / 1589-1623 / 1624) arrived there from Mantua, where he served as a painter at the dukes of Gonzaga and studied samples of Venetian painting in a magnificent palace collection.

Fetti became a follower of the Karavaggio rebel; acquaintance with the German Adam Elsheimer, another kind of caravajist, made him submit to the effects of contrasts of light and shadow, and the admiration for the expression of the Rubens compositions confirmed in an effort to transmit the trepidation of the picturesque texture with a free smear that preserves the trace of the movement of the brush.

Fetti filled his composition “Melancholy” (“Thinking”) with many symbols known from the masterpiece of Dührer. Attributes surrounding the female figure, reminiscent of his winged genius, mean a Christian postulate about the brandy and vanitas vanity of existence (a popular plot of vanitas), and the vine means one who has accepted human sins in the name of eternal good life.