“Meleagr and Atalanta,” Jacob Yordans – a description of the picture 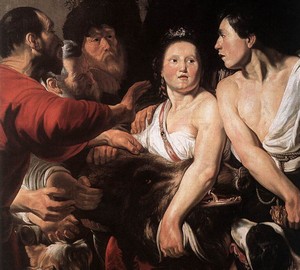 This bright and memorable canvas was written by the artist in the early time of his work, but already clearly reflects his writing style and the fashionable style used – baroque.

The picture exploits a popular theme from ancient Greek myths about the hunter Meleagra and the brave girl Atalanta, who turned out to be a master of hunting no worse than men.

When the father of Meleagra did not bring the necessary sacrifice to the goddess of hunting Artemis, she sent a terrible monster to his kingdom – a giant Caledonian boar. This terrible, wild animal terrified the settlements and ruined the fields. Meleagr threw a cry among the best Greek hunters, and he still managed to defeat the monster.

Atalanta inflicted the first wound with a boar, weakening the animal and thereby ensuring the possibility of its destruction. For this, she was rewarded according to the then law: she was handed the head and skin of her faith as a well-deserved hunting trophy.

This particular moment is captured in the picture. In the center of the picture is the Atalanta itself in a snow-white chitone and with a precious bandage over her shoulder. She holds her knees, clutching her hand, the huge head of a monstrous boar with predatory flipped fangs. Hunters crowd around her, challenging her right to prey and honor. Their greedy hands reach for the trophy, trying to take it from Atalanta. The meaning of the action is understandable – everyone wants to become a hero and is outraged that a woman was in this place.

In the picture, Atalanta turned to Meleagra standing next to him and looks at him inquiringly while he defends his decision. At the bottom of the picture, hunting dogs, crazy with the smell of fresh blood, also stretch their faces to prey.

The picture, as always with Yordan, is impressive in colors and a complex multi-figure composition. The faces of people are written out very carefully and carry memorable features. Interestingly, Atalanta and Meleagre are very light skin, literally shining on the canvas, while all other faces are dark, dilapidated or red.

The picturesque virtues of the canvas immediately allow us to attribute it to the work of this particular master. He became famous for his mastery ability to create complex, combined compositions and masterfully depict clothing folds. Possession of the brush puts it next to another great Flemish – Rubens.