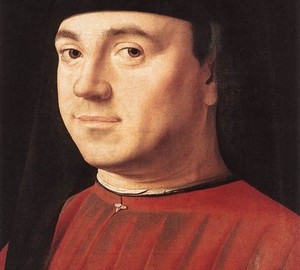 Men’s portrait – Antonello da Messina. Around 1475-1476. Wood, tempera, oil. 31×25.2
A Sicilian artist who worked in Venice and continued the tradition of her art, Antonello da Messina (about 1430-1479) studied painting in the Netherlands, combining the features of the Venetian and Northern Renaissance in his work.

The dark background of the picture, from which the face of the depicted, subtle psychology and the desire not to depart one iota from the life truth when working on a person’s image, are features of Dutch portrait painting. The artist captured the Venetian patricia with a living and smart face, cunning, he looks at the viewer with a squat and grin lurking in his eyes and corners of his mouth. At the same time, the portrait is somewhat idealized, the man looks detached from the worldly bustle, internally raised above it, and greatness is read in his appearance. All this was inherent in the painting of the Italian Renaissance, when, creating a portrait of a man, the creators sought to put the image on the podium, to look at it through the eyes of eternity.

The juicy colors of the picture are explained by the fact that the artist used the oil painting technique borrowed from Dutch masters.