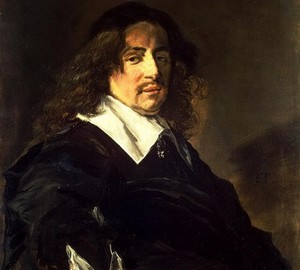 Frans Hals was one of the most famous painters of the Dutch golden age. The master of the portrait genre created more than 900 works in which he presented children, the poor and aristocrats, guardsmen and drinking companions from various zucchini.

The “male portrait” refers to a series of portraits similar in the production of the model: it is represented in the post-harvest against a dark background, from which the face and elements of the wardrobe – gloves, a white collar protrude with bright contrast spots. Perhaps the man depicted in the portrait is an officer, his right hand, lying in the place where the sword handle is usually located, hints at it. Halsa works in a new free manner with a wide tangible smear that simulates the shape well. Two centuries later, the innovative picturesque manner of Halsa will inspire a whole association of impressionist artists.