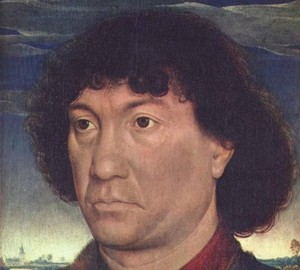 Men’s portrait is Hans Memling. Around 1470-1480. Wood
Here is one of Memling’s most significant portrait works. This is a submersible image of a middle-aged stern man. The artist gives it as close as possible, the mass of coolly curly dark hair almost touches the edges of the picture; it seems that the head of the portraised is moved close to an imaginary plane separating the world of the picture from the world of the viewer. The artist (and after him the viewer) carefully considers the large features of the wide face at close range, noting the characteristic shape of the lips, familiar folds around the mouth and nose, a firm, motionless look.

Like many of the best Dutch portraits of the era, the picture with amazing persuasiveness conveys physical being: the depicted person “exists”, he “is present” here, and his image could least be called “the shadow of life”, as art was often called in the old days. The folded fingers indicate that once the picture served as a diptych’s trick: some kind of religious scene occupied the second sash, and the person in the portrait prayed to her as if. In the Memling era, such diptychs were widespread. On the back of the board on which the portrait is written, the coat of arms of the customer is depicted, but there are still no attempts to determine the name of the person to whom it belonged.

Behind the shoulder of the unknown, a thin distant landscape is visible in the picture of Memling. Nature, its proper beauty, its special life – all this since the beginning of the 15th century, from the era of van Eik, attracted the attention of Dutch painters, but remained in their works not the main, but the secondary motive – the background for the biblical scene or portrait.