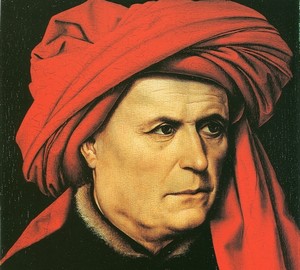 Men’s portrait – Robert Kampen. Around 1435. Wood, tempera. 40.7×28.1
Robert Kampen is a Dutch painter, one of the founders of the art of Early Renaissance in his country. The name of Robert Campen is found in many ancient documents.

Campen portraits are a striking phenomenon in Dutch painting of the 15th century. They differ from the rather conventional profile portraits of the previous century by the ultimate accuracy of writing the model, its individual features. The artist created a new type of composition: a submersible image of a person in three quarters, given against a neutral background. The hero in the picture appears exactly as he is in life. The painter is far from the thought of embellishing it, does not hide any physical disabilities. On the canvas – a typical burger, the expression of humility and piety is supplanted by self-esteem.

It is believed that this is a pair portrait. Therefore, check out the female portrait of the artist.