Mermaids, Makovsky – overview of the painting 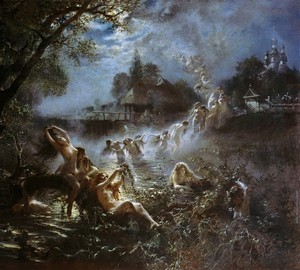 Russian art has always turned to its history. Ancient pagan rites, legends, and beliefs enjoyed no less interest among the painters. In them, the authors saw a storehouse of new stories, as well as the opportunity to experiment with technology and composition.

One of the most beckoning folk characters is mermaid girls who live in river waters and sometimes go ashore on a moonlit night. These are drowned girls, suicides, and some thought they were ugly with a large body and confused hair, while others insisted on the insidious beauty of river nymphs, which can be very dangerous, especially for men. Rusalki dedicated their paintings to I. Repin, I. Kramskaya, Konstantin Makovsky did not stand aside, offering a completely different interpretation of his heroines.

If on the canvas of Kramsky mermaid they appear to the viewer as unhappy spirits in long white shrouds personifying their sad fate, then Makovsky has beautiful witches who spin in a bizarre dance. Each figure is fancifully curved and presented in an unusual angle, and on the matte skin the sun flashes shine. The whole picture “breathes” with mysticism and some secret – the viewer, as it were, involuntarily witnessed this mysterious dance ceremony.

The composition of the picture gives rise to all this uncontrollable dynamics. A sensual whirlwind from naked beautiful bodies takes off from water to the lunar disk.

This spectacular plastic of river girls did not resonate with critics – B. Garshin and V. Stasov spoke too negatively about the Mermaids. However, the discussions of this work were so stormy that Emperor Alexander himself decided to visit the exhibition, although before that he was more than calm about genre painting. The emperor liked the picture.

Today we can be quite in solidarity with Alexander – a finely selected palette, an unusual composition, carefully written images and fantastic decorations cannot leave anyone indifferent.