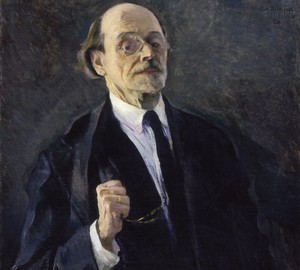 About the life of Mikhail Vasilievich Nesterov we know quite a lot. And all thanks to his autobiography “Old days”, released shortly before the artist’s death.

His life was difficult enough, but the inner core, the light of the soul, the flame of creativity is not allowed the master to lay down arms, forcing to move forward. In the end, he took it to a place in the history of painting, which has earned an outstanding painter, singer of Russian historical…

Mikhail was born a quiet evening of 19 may 1862 and was the tenth child in a family of merchants, but of the 12 children born alive, only two – myself, Michael and older sister Maria. Not hard to guess that the boy was marred by sorrow, but the painter often thought that no matter what, his mother Maria M. and the father of Vasily, has managed to create strong, friendly family, where everyone got along and were friends. Nesterov fondly remembered his childhood years.

So from an early age, Michael showed an obvious talent for drawing. No matter how trying parents to teach the heir to the “family business” – trade, none of this came out. And here we must pay tribute to parents who have shown the sensitivity and breadth of vision, allowing Michael to do what he liked – they transferred him from the Ufa school in the Moscow school of painting, sculpture and architecture.

With the blessing of his father (and with his assistance), Mikhail began training, being constantly in search of his painting, “the picturesque ordeal”, as he called this period, the artist in his biography. A big influence on becoming an artist had a future. After Perov sick, Nesterov leaves school and goes to the art Academy in St. Petersburg. However, there he did not found what I longed for his soul to the strict canons of classical painting the living talent of the artist was bored. Nesterov more willing to spend time at the Hermitage, copying the paintings of old masters. But by their very nature, Nesterov was closer to Moscow with its “Russianness”, the Patriarchal than to the newfangled European St. Petersburg.

In 1885, Nesterov graduates from Moscow school (where he returned after long hesitation) with the title of a free artist, receiving two medals for the sketch and drawing. In the same year is another important event in the life of the master – he married Maria Martynovskaya, without receiving the approval of parents who believed marriage was too hasty.
Lived after the wedding modest, Nesterov worked as a Illustrator. Expected addition. But the birthday of his daughter Olga turned around and the day of the tragedy – “beloved Mary”, the artist’s wife, died after giving birth. To forget, Nesterov has completely immersed himself in work. Pain helped the artist to find his theme, the theme of “Holy Russia”. At the same time, he met with artists of the “Abramtsevo circle”. Another significant event of those times – presentation of the painting “the Hermit” at the exhibition of the Wanderers.

90-ies marked the artist’s travels. He collects stories, emotions, feelings. Nesterov visited Italy, Germany, France, Greece, and in addition makes a great journey through the ancient Russian cities. Permanent “place of residence” where the master returns from all his wanderings, is Kiev. Here he met his second future wife – Catherine Petrovna Vasilyeva.

A year of recognition for the artist is getting 1910-th. He finally returned to Moscow, became a member of the mobile society, was elected a member of the Academy of arts. The master continued to create, although no clearly defined direction does not match the personal style of the author. 1917 Nesterov met safely. He worked more on the portraits, sometimes referring to the popular genres (a landscape, “Russian scenery”).

In 1946, Nesterov did not, but the death was not sudden for him. He managed to write a book and finish my latest painting.

In the works of masters felt “Russian theme”, inspired, full, rich. Many Russian artists worked successfully in this way, but Nesterov managed to find his intonation, which is the major creativity of the artist. Because of this Danish artist’s paintings touch your soul still, worries imagination. And we, witnesses of vanity tech of the XXI century, admire and yearn for times that are not caught, but who look at us from the paintings of Nesterov, the times distant and long-gone Russia, beautiful, and sincere…