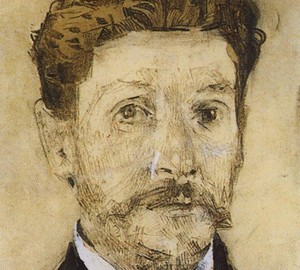 Vrubel – the name of the Polish, but by the time of the birth of Mikhail for three generations of the artist’s ancestors lived in Russia, choosing the military path. Michael soon left without a mother, the family moved from place to place, followed by his father, an officer in the Cossack army.

The passion for painting started early. Father encouraged the enthusiasm of the younger son. Took him to classes at art schools and studios. When the time came to choose a profession, the future master was completely obedient to the will of the father who thought his son’s future must be associated with the “benefit to society”. Vrubel entered the St. Petersburg University’s law faculty.

The University was over, but the lawyer of the future artist was not a single day. He with great difficulty held all the difficulties of the annual conscription, and against the wishes of his father he entered the Academy of fine arts.

With artists Vrubel met while still a student lawyer. Every free the hours Michael spent in the Hermitage Museum studying the works of great masters. In the art of “coterie” of St. Petersburg he had become his own, having to learn not only in classrooms of the Academy, but also in the workshops of his friends.

Teachers Wrobel noted his keen sense of form, color, the ability to convey the complex texture. His main teacher Chistyakov believed Michael is the most talented of his disciples. This Professor recommended the young master for the restoration of the frescoes in the medieval monastery near Kiev.

The Kiev period in the life of the artist is closely associated with the study of the canons of Byzantine painting. The artist works with gusto, forgetting about everything. But soon the passion is replaced by throwing. Master then quits his job and goes from Kyiv, returns and is ready for restoration. Such moves could not appeal to the customer. The creative ravings are added financial problems.

In his works the artist contributed his understanding of the biblical stories. The Church refused the services of Wrubel, and only after his death found that he was right and philosophical interpretation of the Church’s paintings.

After the Kiev period of the artist’s life, a period in Moscow. The works of Vrubel’s not popular, customers had not. A lucky encounter with a famous patron Savva Morozov allows the artist to partly solve the financial problems.

During this period, the master is a demonic theme. His series of “demon” is still considered the best-known works, a classic example of art Nouveau of the turn of XIX and XX centuries.

In spite of undeniable genius and innovation works, they already can discern the signs of the disease, which interrupts the creative activity of the artist.

The patronage of the mammoth allows the artist to work actively in his own manner, ignoring the tastes of the public. The artist draws several Opera performances, tries his hand at architecture, ceramic plastic. Criticism often spoke of the works of Vrubel sharply and unjustly derogatory.

The twentieth century brought the master of the two great tragedies: his father died, and long-awaited son is born in a serious defect – a cleft lip. To personal tragedies added creative severe depression.

In 1902 the artist placed in a psychiatric hospital. His condition is constantly worsening and relatives of friends are preparing for the worst. However, the efforts of Professor Bekhterev to become a success. A year later, Vrubel leaving on vacation in the Crimea. And although the work he can’t, but there is hope for recovery. Hope was destroyed in one moment Vrubel loses his son.

Small periods of clarity, gave way to madness… the Last event that the master was able to perceive his election as an academician in 1905.

The next five years, the artist has only existed as a regular patient different clinics.