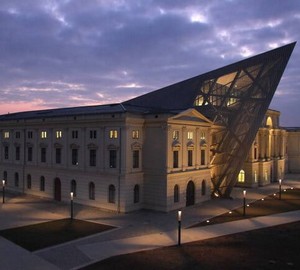 History Museum of the Bundeswehr is located in Dresden, Germany, in the historic district of the city – the Albertstadt. This is one of the 2 biggest war museums in the state.

You can have different attitudes to the very idea of the organization of military museums, but to exclude the component related to war and army, in the life of society would be absolutely incorrect.

The history of the Museum

The exhibition is located in a historic building, which was built in the period from 1873 to 1877. It was intended for the main Arsenal of the garrison of Dresden. This role is the building successfully performed till the end of the First World War, but also at the beginning of operation, it housed an exhibition of weapons, orders and medals.

In 1914, the Arsenal was founded “Royal Museum of the Saxon army,” remained here and after 1918, some facilities were leased. To receive visitors, he was only 9 years later. In 1940 the Nazis exposure existed as the “Museum of the land forces” and closed with the collapse of the regime in 1945.

The collapse of Nazi Germany led to the fact that all the museums of the country, or otherwise associated with military Affairs and technology, were closed. Part of the exhibition was in the Soviet Union, and the building was used for various exhibitions and events. One of the most popular was the annual Christmas fair. This was especially true in the period of rebuilding the city, which was badly damaged during the war from allied bombing.

After the unification of East and West Germany into a single state Museum acquires its present name, the Military-historical Museum of the German armed forces and transferred to the Ministry of defence. Since 1990, the Museum presents exhibits of military purpose from the most ancient times to the present day, including the period of the Second World War and the era of the German Democratic Republic. It has two branches: Museum of German military aircraft based in the territory of the former military airport in the capital and the Museum of historical weapons located in the fortress of königstein.

Features of the Museum

Visitors are immediately impressed by the Museum building. It has retained its historic architectural appearance, but has received a modern addition in the form of avant-garde buildings of glass and metal. It has the form of an acute triangle, “wedged” in the old building. This can be seen in the modern frame of reference, which literally dissects the history, and to the military operations, destructive and transforming the creations of human hands.

The new part of the Museum building built in 2011 by architect from USA by Daniel Libeskind, a Polish-Jewish origin. This can be seen as a kind of irony – the building of the military Museum in Germany designed by people whose ancestors have suffered more than others from the Nazi military.

The expositions of the Museum are 10 thousand m2 and include more than 10 thousand various exhibits.

Schedule:
Closed Wednesdays
Tuesday and Thursday-Sunday from 10:00 to 15:00
Monday from 10:00 to 21:00
The exhibition is divided chronologically and include thematic exhibitions presenting various aspects of military life. Here you can see not only military equipment and uniforms, equipment and weapons of different centuries, but also to get acquainted with the life of soldiers and officers outside of the military campaigns. Thematic exhibition open for visitors a lot of unusual things, such as the role of animals in war.