Miracle of the Apostle Paul on the island of Malta, David Tenirs the Elder 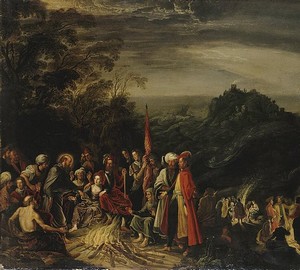 In 1971, the first monograph about this painter was published – “David Tenirs the Elder. Forgotten Flemish follower of Adam Elsheimer. ”. According to its authors, Duverger and Vlite, the ermitage painting by David Tenirs the Elder was created around 1623 and its source was the eponymous work of Adam Elsheimer, stored in the National Gallery of London. In the paintings of Tenirs to the Elder and the German master in the background, a sunken ship is visible, on which the apostle Paul sailed from Jerusalem to Rome. In the foreground of the comparable works are depicted three groups of characters located at the bonfires – these are shipwrecked, people drying clothes and hospitable islanders. In the left group in both scenes is presented St. Pavel.

According to the gospel legend, a snake attacked Paul, who gathered brushwood for a fire, which he threw into the fire. The poisonous echidna, regarded by Christians as a symbol of Satan, did no harm to the apostle. This was perceived by the natives as a sign that Paul is God himself. In the works of Tenirs the Elder and Elsheimer, not only the composition as a whole and the nature of the lighting are similar, but also the image of a fantastic landscape, the interpretation of the characters. The fire of bonfires snatches naked female and male figures and colorful oriental costumes of local residents from the night darkness.

In comparable works, there are only slight differences. In particular, Tenirs the Elder on a hill (right in depth) has two figures with tibia, and the predecessor has one. Flemish, compared with the German artist, increased the scale of the figures in the left group, and more diligently wrote out the details of the costumes of these characters. In the right corner of both compositions, a naked woman is depicted from the back – standing at Elsheimer, sitting at Tenirs the Elder. In fact, the painting by David Tenirs the Elder is a version with minor changes in the work of Adam Elsheimer.