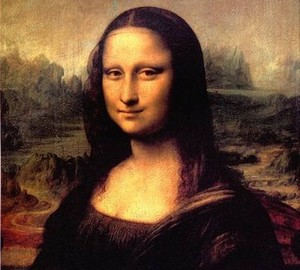 In the records of the great Leonardo da Vinci (1452-1519), the genius of the Renaissance, there is not a single mention of work on the portrait. There are many versions of the one who is depicted in this work. Among other opinions, such that Mona Lisa – and the self-portrait of Leonardo himself, and a portrait of his student, and a portrait of his mother or just an ideal collective female image were also shown. According to the “official” opinion, the picture depicts the wife of Florentine merchant Francesco del Giocondo Lisa Gerardini.

On the lips of Mona Lisa, the famous subtle smile froze, giving her face a riddle and charm. Not the viewer looks at her, but she herself watches him with a deep, all-understanding look.

The picture is made with almost transparent, unusually thin layers. It seems that Mona Lisa is not painted, but completely “living”. The strokes are so small that neither the microscope nor the rays of the x-ray detect traces of the master’s work and do not determine the number of picturesque layers. The “Jokonda” is unusually airy. The air turned out to be real, just like the Mona Lisa herself – also “real.”. The space of the picture is filled with a light haze that transmits scattered light – “sfumato”, by definition of the artist himself.