“Monk by the Sea”, Caspar David Friedrich – overview of the painting 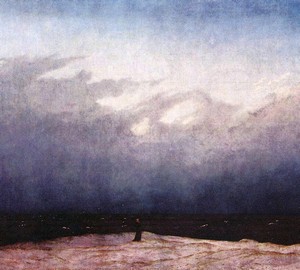 The painting “Monk by the Sea” was important in the work of Caspar David Friedrich. The artist only felt all the delights of success – his painting “Abbey in the Oak Forest” caused a great resonance in society and a positive review from art historians. The painter needed, so to speak, to consolidate success and this “strategic” important role was remarkably fulfilled by the presented work.

On the shores of a dark, gloomy sea on uneven hills of sand stands a lone monk turned away from the viewer. His pose is thoughtful, stubborn, but calm. It is not known how old he is, what he looks like, what he thinks. The viewer involuntarily puts himself in the place of a monk whom something led to the deserted shore. And this is a very frequent reception at Frederick, according to which he can be accurately identified among other artists.

The landscape of the picture is complex in its mood. As is customary for romantic artists (which was Caspar Friedrich), the landscape plays a decisive role in the work, visiting philosophical thoughts of an existential order. Pointing out in the title that the hero of the canvas is a monk, the author, as it were, hints at some religious motives of his work. It is clear that the monk is not waiting for the ship, does not hope for any meeting – most likely, he just came to a secluded place to listen to the sea and his thoughts.

Some information about the history of the creation of the work has been preserved. It is known that in the original version, Frederick wrote sailing ships in the distance, but later removed them. The artist’s friends noted that he made changes until the day of the exhibition, and these edits concerned small details.

On dark blue waves you can notice small white crests. Some mistakenly take them for low flying gulls.

Despite the turbulent landscape, the picture “breathes” with inner harmony. Everything came together here: man, God, natural power. A hero immersed in his thoughts is counted as part of this large complex world. And he does not conflict with him, but logically fits into the vast expanse. The dark sky, turning into a gray-yellow chisel, does not look threatening – as if clouds were about to dissipate and the smooth light of the moon and stars would fall to the ground.

The public also welcomed the map of “Monk by the Sea”. Already during the first exhibition in 1810, both iconic paintings (Abbey and Monk) were bought by the Prussian king Frederick William III. Is this not the highest recognition?