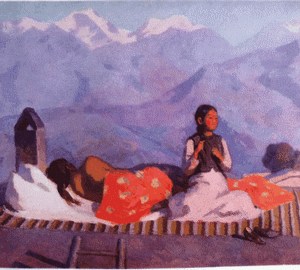 Morning in the mountain village – Semyon Afanasevich Chuykov. 1967. Oil on canvas. 118×179
On the canvases of Chuykova – mountain villages and pastures, Kyrgyz shepherds, children, slender dark women. Kyrgyzstan is the birthplace of Chuykova. His childhood passed here. Chuykov studied first at the Tashkent Art School, then in Moscow, in VKhUTEMAS under the direction of R. R. Falka. His works “Poor Ail” (1936), “Hunter Mr. Berkut” (1938), “Evening in the Taboon” (1938), performed shortly after graduation, attracted the character of plots that reveal the specifics of the nature of Kyrgyzstan and the originality of national life. However, with the closest attention to the daily life of Kyrgyzstan, Chuykov does not become its home writer. He is not interested in small everyday details, but in the poetic atmosphere that arises as a result of a person’s constant contact with nature and manifests itself in the whole way of life, behavior and character of people. People with proud posture and smooth movements seem quite natural against the backdrop of majestic nature, flooded with the generous southern sun. There are rarely more than two or three figures on the Chuykov canvases, and, as a rule, there is almost no action. The heroes of his paintings are most often immersed in the contemplation of the environment. The artist especially loves the motives of the early morning or the upcoming evening, when daytime affairs and cares have not yet managed to take possession of people or are left behind when nothing violates the harmony of man and nature (Uthro, 1947, Evening, 1948).

This group of works also includes the picture “Morning in a mountain village.”. In the center of the composition is a Kyrgyz girl. A round children’s face with a dark blush and narrow black eyes glows with joy. In the crystal clear morning air, majestic mountain ranges appear to be close, towering against the background of a pure blue sky. The slopes illuminated by the sun alternate with deep shady gorges. Bright sparkling colors of the flaring morning are as if saturated with warm sunlight. Color for the work of Chuykov is an essential expressive means. In the color, the artist builds a form, transfers space, volume, texture of objects and, most importantly, creates an emotional atmosphere.