Morning in the pine forest, Shishkin, 1889 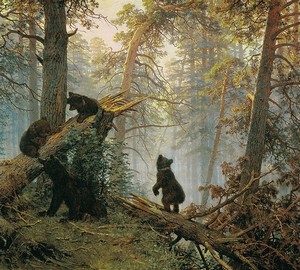 Morning in the pine forest is one of the bright works of I. Shishkina. The masterpiece is saturated with the delight of the nature of the plant and animal world. Everything looks very harmonious in the picture. Green, blue and bright yellow tones create the effect of nature barely awakened from sleep. In the background you can see bright golden shades – this is a hint of the breaking rays of the sun. They give the picture a solemn atmosphere. A fog still swirls on the ground, depicted quite realistically, and if you focus on this part of the masterpiece, you can feel the morning cool.

The picture “Morning in the pine forest” is very bright and so realistic that it seems as if it were not a masterpiece of the brush, but a snapshot of the forest landscape. Each detail of the picture is depicted professionally, with love and trepidation. In the foreground we see a pine tree littered with the root, on which bears climb. They frolic, causing positive emotions. For them, the morning of a new day is a real holiday. The cubs are so kind and harmless, as if tamed. It seems that they are not capable of cruelty and not at all predatory, despite their animal nature.

The main emphasis of the picture is a combination of sunlight in the background and bears on the tree in the front. If you visually draw a line through these objects, then we will see that they are depicted by the artist most vividly and saturatedly. Everything else is just easy to supplement sketches.