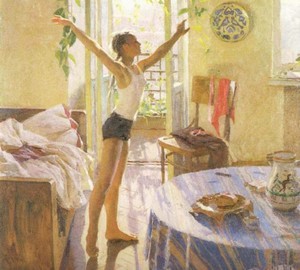 “Morning” is one of the most famous paintings by Tatyana Yablonskaya. It attracts with a special joyful and fresh mood, an all-consuming stream of sunlight from the window. The painting was often printed in school textbooks and children’s books, so it crashed into the memory of representatives of those generations who grew up and grew up under Soviet rule.

The canvas depicts a rather large, poorly furnished Kiev artist’s apartment. The main character of the picture is the eldest daughter of Yablonskaya, Elena. At that time, the girl was 13 years old, she was engaged in ballet and gymnastics, so every morning she performed a warm-up. Once the mother saw what grace the daughter was engaged in, and decided to capture it in the picture. The result did not always please the artist herself. She was a self-critical person and often changed her mind. So, for example, regarding this insanely popular picture at the end of her life, Yablonskaya wrote that she was “anti-vigilant”. Of course, this is a subjective opinion, because from the point of view of painting, the canvas just deserves all praise.

The best that has been conveyed in the picture is a feeling of lightness, carelessness of childhood, joyful summer morning. The room is flooded with bright morning sunlight, which creates clear long shadows and fills the room with air, makes it voluminous. It flows through open French windows onto the balcony and through a nearby window, half hidden by the edge of the picture. These are very high windows with oval completion, without curtains, decorated only with fashionable then curly plants – lianas.

In the foreground is a round table, covered with a rather bright blue tablecloth with stripes, on it is a girl’s breakfast, modest food, familiar to all Soviet people. Behind him, at the opened door to the balcony, there is a wooden chair with a school uniform. On his back is a ironed pioneer tie. Elena, the artist’s daughter, depicted in the picture, said that she had recently been accepted as a pioneer, and she was incredibly happy about it. In that era, this was a landmark event in the life of every child.

An unassembled bed on an old wooden couch for many critics corresponded to chaos, a past that needs to be forgotten, and a bright, sun-drenched room is a future when everyone will be happy. A girl pulled out into the string became the “first swallow”, reflecting the mood of most people during the start of the “Khrushchev thaw”. That is how this picture was perceived then.

The modern audience, deprived of ideological background and imposed “mass consciousness”, sees a moment of direct, sincere happiness seized from real life. Perhaps the picture is so perceived simply because the day is sunny and warm, the girl is only thirteen years old, life is beautiful and everything is ahead of her.

A unique story is associated with this canvas, or rather, it touched the character depicted on it. In Kazakhstan, the boy fell in love with the girl on the reproduction of the picture. Many years later, they met, fell in love, got married and lived a long and happy life together. So the feeling of happiness emanating from the canvas was prophetic.