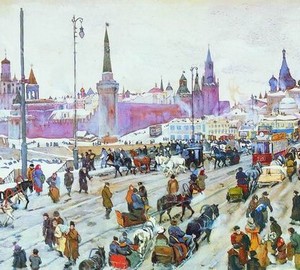 This picture is of great value not only as a work of art, but also as a monument that has preserved for us the architectural appearance of old Moscow and its daily life in all realities.

A huge number of characters, objects and architectural details are placed on a horizontally not so big picture. This is a panorama of Moscow for the first decade of the twentieth century overlooking the Kremlin from the Moskvoretsky bridge, from the opposite side of the river.

This is a very bright, multi-color and multi-figure watercolor, which almost with photographic accuracy captured the simple life of a large city. In the picture, winter or the very beginning of spring, because the ice on the river is not continuous – barges that have frozen into it stand on the embankments, but it is clear that the layer is thin, the water shines through. This is emphasized by dirty, trampled and scattered snow on the bridge, along which a huge number of pedestrians, loaded sleigh, drawers with gray hair, covered crews and even a pretty red tram moves into the city – the famous “Annushka”.

The Moscow-Retace bridge was one of the main trade arteries, because it led to the center of the capital and to the shopping malls. It was rebuilt in 1935, so paintings reflecting the real appearance of the city of that period are extremely important for historians and archaeologists.

This image is a real puzzle for the viewer. It can be considered for hours, because it is not just a stopped moment – these are personal stories associated with each of the characters. There are a lot of them, they belong to different social strata, so the picture carries so much information.

The picturesque side of the work is also impressive. This is a colossal work in which the undoubted picturesque gift of the artist manifested itself. With all the multi-flower, it does not seem motley, it will be smoothed out organically, wholely and very interestingly.