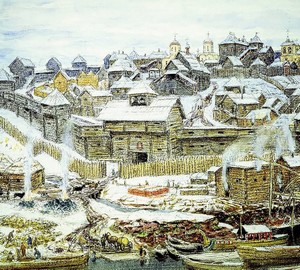 Moscow Kremlin under Ivan Kalite – Apollinariy Mikhailovich Vasnetsov. Pocket on cardboard, watercolor, coal, pencil. 51 x 69 cm
More than once in the past centuries, Moscow has been rebuilt: powerful walls and towers have been rebuilt, bridges have connected the banks of the river, new temples have risen in place of the destroyed, princely chambers and monasteries have been erected, entire neighborhoods have been built up with houses and shopping shops.

Apollinariy Mikhailovich Vasnetsov set himself the difficult task of showing how the appearance of his beloved city changed, and he successfully completed it, creating a whole cycle of historical work. A separate group is formed by images of the Moscow Kremlin in various eras, by which it is easy to trace all the changes that are happening to it.

Studying the remains of massive logs found during excavations and preserved foundations, for hours reading the ancient annals and works of historians, studying ancient objects found by archaeologists, the painter restored the guise of the capital. He knew Russian architecture, traditional clothes and household items well, and he managed to combine historical facts and artistic crafts in his paintings. His Moscow is incredibly lively and real, it seems that the master painted her streets from nature.

The XIV century in Russia, the time of the reign of Grand Duke Ivan Kalita. Late fall. Recently, snow fell, stirred the ground, lay down on the roofs of the chambers and manor houses with white veil, spread over the high slopes of Borovitsky Hill. On its top, among wooden houses, in a gentle pale creamy color, white-stone temples glow. The domes of the Assumption and Annunciation Cathedral, the Arkhangelsk Church are clearly visible. Construction is in full swing – among the gray-brown buildings, golden-yellow log cabins of the house under construction stand out, there is a new temple in the forests.

The fortress on the hill is surrounded by impregnable oak walls with narrow loopholes. They combine massive quadrangular towers of thick logs. A frequency of strong trunks with pointed ends was built near them. The wide gate is open, opening the way through the pass tower, above the entrance to which the icon hangs, to Cathedral Square – the center of the Kremlin. A horse convoy carrying logs for construction is slowly walking along a wooden bridge over the still frozen river.

Life is in full swing. Large vessels are unloaded on the river, delivering a drill forest. Part of it is still on the shore, the rest of the trunks are folded with neat stacks. Fishing tarred boats buried their nose in a red-brown shore, a brightly colored rook on the waves nearby. The age leads from the pier of the horse, gaining water in a large barrel.

High bridges connected to a strong building on the shore stand in dark, shallow water. Nearby, long rails on high pillars froze in the cold air, helping to lift the load. The stoves are heated in the houses, white smoke comes from the pipes, breaks out through the narrow windows under the roof and the opened door.

In the distance, behind the walls you can see the landing, where the townspeople settled, who did not have enough space in the fortress.

A cold calm palette – a bluish cloudy sky, gray, olive-brown colors of buildings, rare yellow spots of bushes on the slope, a white color of snow cover – all this creates a calm and peaceful mood. The peaceful life of Muscovites engaged in ordinary work flows measuredly. And the Kremlin, a symbol of the reliable protection and power of Russia, stands indestructible.