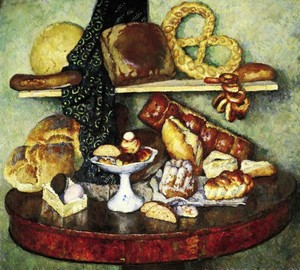 Moscow snow – Ilya Ivanovich Mashkov. 1924. Oil on canvas. 129×145
Immediately after the appearance of this work at the exhibition, it was recognized as a classic of Soviet painting. Official Soviet criticism noted the relevance of still life to the tasks of painting social realism: indeed, hunger is in the country, but in art is an amazing abundance! Nevertheless, an extraordinary picturesque gift of the artist manifested itself in this work: dynamic composition, color juiciness – all these features were inherent in the artists of the Jack of Diamonds.