Moses with the tablets of the Law, Guido Reni 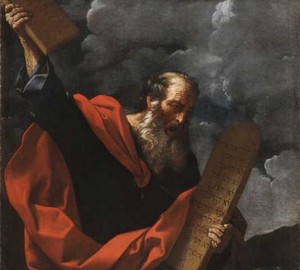 Moses with the tablets of the Law is Guido Reni. Around 1624. Oil on canvas. 173×134
At the beginning of the XVII century, in Italian painting, students of the Bologna Academy come to the fore, that is, pupils of the Karracci brothers, as well as followers of Caravaggio. Both of these areas have united in Reni’s work.

This canvas depicts the Moses who received the divine commandments. The powerful and inspired appearance of the prophet emphasizes his scarlet robe. The clouds running through the sky reinforce the exciting and solemn moment of the event, in which nature is involved. Reni’s artistic passion brings him closer in spirit to Caravaggio, from whom he took over not only contrasting lighting, but also the ability to emotionally sharpen what is happening in the picture. So, having deliberately dramatized the depicted, which was characteristic of academicians, turns into a living human excitement among a painter. At the same time, Reni transfers the universal scale of the event and gives the person that inner height when he can talk with God.