“Mother of the World”, Rerich – overview of the painting 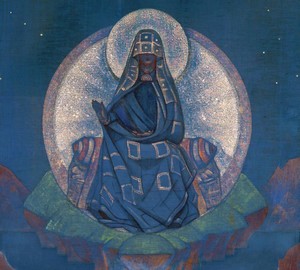 For Nikolai Rerich and his wife Elena Ivanovna, the 20th year of the 20th century was a period of Central Asian pilgrimages. The artist continued to combine the culture of Hinduism, shamanism and Buddhism with traditional Orthodox motives in his philosophical works and visual arts. The theme of the eastern sages and the cosmic importance of female energy prompted him in 1924 to create the work “Mother of the World” from the cycle “Knowledge of the East”.

Calling a picture in the singular will be incorrect, because there are two versions of “Mother”. Both options are very similar to each other – they have one motive and a single color scheme. Both versions were originally New York, but the first option was later purchased for the Moscow Museum named after Rerich. Among the visual differences, we can say that the first is more restrained, while the second contains more decorative elements. The master also used more artistic techniques in him, which made it possible to depict the play of light.

“Mother of the World,” Rerich
The master used his favorite palette: purple, aquamarine and golden hue. The female figure is performed in an interesting style. In it you can catch something from the Virgin from Orthodox icons, Madonna from the Renaissance and Asian goddesses. Probably, by this, Rerich wanted to pay tribute to our ancestors that for millennia they honored the cult of the mother goddess. This superwoman sits on the throne, which is located on an island surrounded by a river of life, which seems to glow from life-giving power. In the foreground, the canvas is depicted by a barely noticeable element, either the cross or the Aq Dorje velic symbol. Around the diamond halo you can see the small figures of “traitors of the east.”. The attractiveness of the image of the mistress complements the fact that her face is hidden, allowing you to fantasize over her divine appearance.