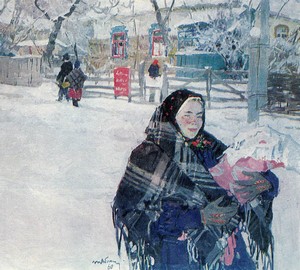 This picture was written by a famous Soviet and Ukrainian artist in 1960, when the country rejoiced in the “Khrushchev thaw” and suffered from total poverty. It captures a snowy winter day in a small town. The canvas has an original composition. Most of it is empty – it only has snow on it, fluffy, slightly trampled by the many legs of passers-by and rolled off by the wheels of a city vehicle.

The long-term picture is the street of a provincial city or village. A fragment of everyday, everyday life is recorded on the canvas. On a snowy street, people go about their own business, shops work, a small bus drives off from the stop.

One-story modest houses and simple fences speak that the town is small, and in the corner of the picture you can even notice a typically village lasso instead of a fence. Everything is very simple, everyday, in principle not attracting special attention.

But the most important part of the canvas is the image of a woman. It is shifted slightly from the center to the side, and it is also not completely visible. This approach of the artist gives the impression of a living moment, snatched from real life and frozen forever, like a stop frame on a TV screen.

A young mother carries her newborn baby in her hands. Judging by the pink blanket, this is a girl. The young mother is alone, but it is not clear to us whether she carries the baby from the hospital or simply went out with him on her own business. She was dressed modestly, in a rustic way, wrapped in a large checkered scarf. Apparently, the street is very cold, the child is also tightly wrapped in a blanket with a beautiful white rim, and there are many different clothes on his mother – a blue coat, several colorful scarves on his head, warm knitted gloves with ornamentation.

But the most important thing in this picture is the face of a young mother, or rather, the expression frozen on him. Her gaze seemed to turn inside herself, her face was reddened by frost, and a slight smile froze on her lips. What does she see, what she thinks? Maybe about his fate, or maybe about the life and future of his child? She is a mother, which means that her main task is to protect the child at all costs.

The path of this young woman as a mother has just begun. Ahead she has many sorrows and joys, but now she is simply filled with the happiness of motherhood. The picture perfectly conveys these feelings. Despite the winter depicted on it, it broadcasts typically spring moods – joy, freshness, hope for a better future.